I live in Chicago. An undisputed urban city. This past weekend there was an awesome blizzard! It snowed and snowed - all day - Friday and Saturday. I went plein air painting Sat AM and gave up on account of the unnavigable snow. Once home I bundled up the kids and headed to Montrose Harbor for major sledding. What a hike up that hill. Again, the snow is deep and walking while pulling a 35 lb 5 year old kid is hard work. We all had a good time and ran into some other kids we knew.

"Good snow" being rare in Chicago, I thought I had to make the most of the opportunity. I called around looking for snow shoes. They were all rented out. Darn. I'd never show-shoed before but it was highly recommended to me. I ended not getting such a great bargain on some used snowshoes at The Viking Ski Shop. Sidebar: This place has everything you need for high end skiing. What is totally crazy is that it's in Logan Square. Logan Square is in the MIDDLE of Chicago - in a mid-to-low income neighborhood - not exactly ski connoisseurs. Crazy! But Viking Ski shop delivered in that their personnel looked every bit the "ski-person" part. Like the older Ski Patrol guys in the Rockies. You can't help but love them. You look at their weathered faces, kind eyes and are put at ease. There's no hustle or angle at Viking. You know you're not getting "snowed" but you're not getting a great deal either. It just is. I can live with that.
Snowshoes, for those of you who don't know, are these metal and webbing contraptions with spikes on the bottom that allow you to walk across the top of deep snow (see photo at top of this post). I tried it and it really works. It's fun too. Unfortunately, in Chicago, everyone is crazy obsessive about shoveling and salting their walks. Especially businesses. Geez. Back to snowshoeing... I tried them on in an effort to pick up some Pockets Pizza for my kids. They work GREAT in deep snow. But most of my neighbors shoveled the small parkway walk leading to the street. This meant there was constant interruptions in the snowshoeing. I moved to the snow covered (but not deep) sidewalk. Wearing snowshoes was harder than walking in shallow snow. A bit aggravated, I unstrapped the snowshoes, put them under the front porch and walked the 1 block.


After visiting the Viking Ski shop, Indigo and headed straight over to REI in Lincoln Park. We rented Alpine Skis for the pair of us. I, briefly, learned to Cross country ski when visiting Camp Awana as a youth. I remember it being hard work and not very satisfying from a gliding perspective. So why did I take this up again, now? I'm in great shape, remember what I learned and wanted to try it again. Also, my need for speed has lessened. I'm old enough now to "smell the roses" or snowscapes - so to speak. 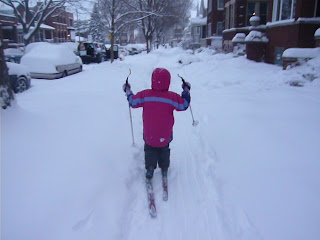 Indi did a great job skiing. She fell a few times, but overall was pretty fabulous for a 5 year old. She didn't like the falling or getting back up. She told me vehemently "I hate skiing!" Aghast! Who's daughter is she? Yeah, her Dad's. *Sigh*. I have high hopes for Ais-a-Base. 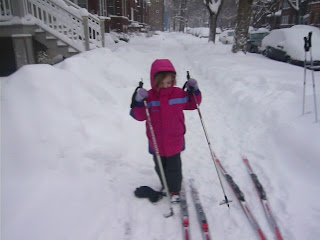 Being born and raised in the city proper, you'd think I'd know nothing of these athletic outposts. You should be impressed and surprised. I know I am! Viva la Alpine! Now get out there and try it! More snowy adventures forthcoming.

Posted by Beck at 2:37 PM 1 explorers in an expanding universe Links 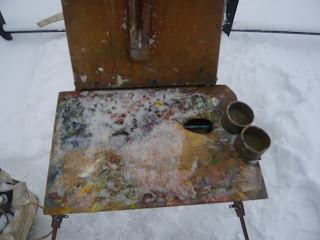 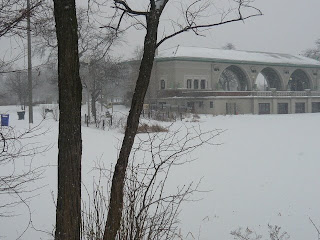 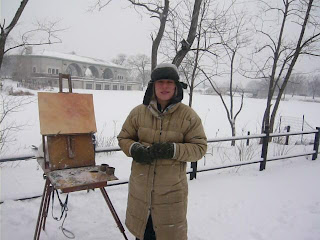 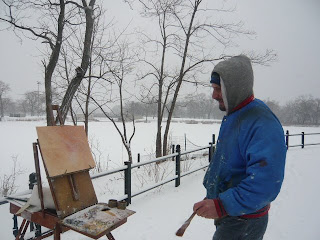 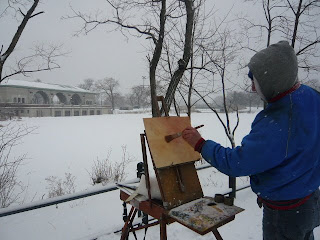 This past weekend there was an awesome blizzard! It just snowed and snowed all day Friday and Saturday. I went plein air painting Sat AM and realized two things: 1) I had a hard time walking thru Humbolt Park because the snow was so deep and 2) It was snowing hard and the wind pretty much froze your face and anything else in in it's path. As a watercolor painter I made small talk with the only other painter out that AM (Go for it Frank DePalma!) and then headed back home.

It was gorgeous in Humbolt Park. The boat house veiled in the falling snow. Ducks made their way across the frozen pond afoot. And die hard dog walkers allowed their dogs to make their way thru the deep snow. I'm glad I know how to dress for this weather.

Posted by Beck at 4:16 PM 3 explorers in an expanding universe Links 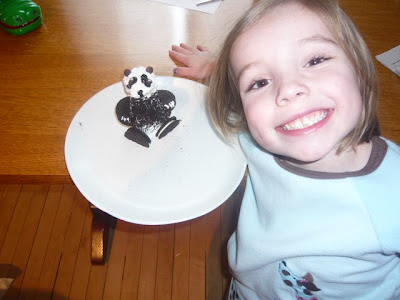 My daughter, Indigo, loves fancy cakes. A friend gave a me a book of fancily decorated cakes and Indi has loved it since she was a wee lass. This Christmas I found a book named "Hello Cupcake". It should have had Indigo's name written all over it. It was about how to create fancy cupcakes.

And we have begun out journey into fancy cupcakes (my longtime facvs). Indi's first pick was to make Panda Cupcakes. We had a lot of fun making and eating them.
For some info about cupcakes around Chicago, check my friend, Justin's blog: www.cupcakerace.com He's also an awesome photographer!

Posted by Beck at 4:47 PM 2 explorers in an expanding universe Links