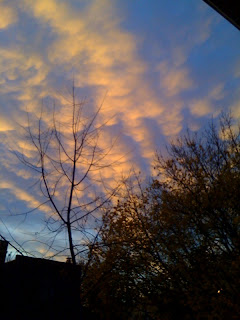 Posted by Beck at 5:55 PM 1 explorers in an expanding universe Links 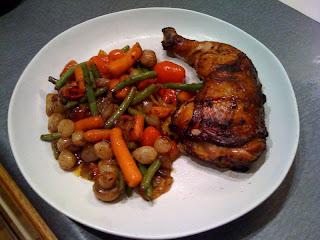 A rainy thursday. On the menu is marinated chicken thigh cooked on the
grill. Coupled with a mix of grilled veges with a butter balsalmic
reduction sauce and misc spices

Posted by Beck at 6:13 PM 2 explorers in an expanding universe Links 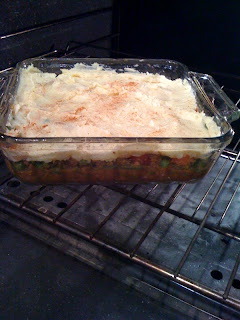 Posted by Beck at 6:23 PM 1 explorers in an expanding universe Links 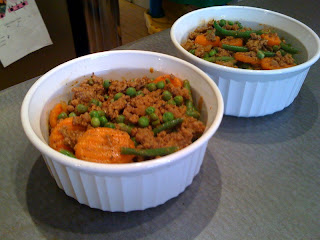 This Shepherd's pie gets topped with mashed parsnips. They are a tad
sweet for my fancy but have good texture.

I riches up the flavor of the pie with tomato paste, bacon grease and
Worchrstshire sauce. Will freeze these large ramekins for future
suppers.

More paleo cooking to come. A new fav is using shredded cabbage as a
bed for pulled pork or stir fry.

Posted by Beck at 4:55 PM 1 explorers in an expanding universe Links 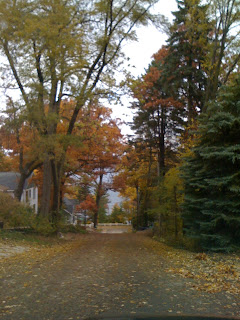 The Facebook project to scare away all of it's users is working. I haven't been able to get into my FB account all weekend. Now I have to blog the old fashioned way... make a real post. What's next? Actually talking to a human face to face?

It's been a busy month folks. The weather has been very cold and wet in Chicago. An abysmal combination. What nice is that autumn is now upon us. The streets are lined with trees whose leaves glisten gold and brilliant. Halloween is next week and we sure have been busy around here wearing costumes, attending bday parties and enjoying our dear friends and family. 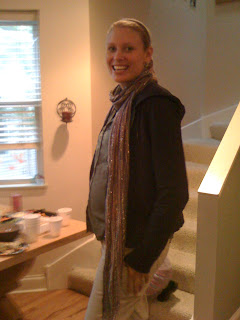 irls and I took a road trip to see my sister in Baraboo, WI. It was a fun time in the car. The girls think they have cart blanche to eat at fast food places. This trip was only 3 hours each way, so there were only pit stops. The weather in Baraboo was frigid. We did not bring enough warm clothes to enjoy the brisk 25 degrees. My 17 year old niece loaned the girls her mittens and scarves. Between that and running around on the inflatables at the Baraboo Fair in the Square, the girls kept warm. We abruptly departed Baraboo when my niece was smoking pot wit her friends in her room. Not a safe place for little kids.

We were treated last weekend when my dear friends The Engstroms (my sista Roxanne) returned home to Chicago after living in Zanzibar, Africa for the last year and a half. Roxanne is my sister from another mutha. She is a great woman and friend. She is 8 months pregnant and has had quite a rough time with this second child incubation. She has been vomiting non stop. She has returned to the States to have this little one and plans to return to Z-bar 6 weeks after birth. She has had a rough go of it and deserves recognition as Trooper of the Century! 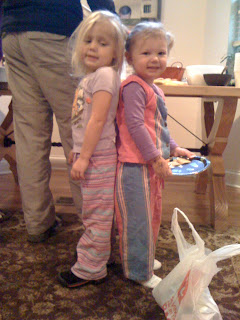 A few thoughts on pregnancy. Pregnancy, especially early pregnancy, appears to be a seemingly passive process. I assure you all it is not. There may be a few woman who don't get morning sickness or gain very little weight and are able to lose it quickly after birth. But for the majority of the women I know, pregnancy is a long hard road with no relief other than birth. The nausea, bloating, vomiting and other personal maladies are silent but so dreadful. If you see a preggo woman, hold the door for her, don't allow her to bend over for anything. Especially if she has another kid. Help her with her groceries, and smile wide and genuinely. You will make her day.

We hit a few bday parties. I helped Emily finish off Mile's Halloween Costume as Super Why. She made the entire costume. I made the chest logo. I love stuff like that and kids love the real deal. They are special and if we can help them feel that way too... bring it on! 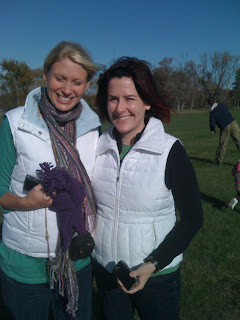 Aislin dressed as a "muscle man". A costume from Gymboree's line. She rocked it!

We visited Roxanne in lake Geneva, Wi yesterday. A quick road trip. The girls played with Anni and Rox caught me up on her work in Z-bar and life there. I know I couldn't do it. So snaps to her and Jason and Anni for all their work and building the computer lab and tech school. More work is to be done. I have to say that I have missed Roxanne immensely. She is genuine, honest, vulnerable, and plain ol fun to be around. She is an original. And she's gorgeous.

Last night I had so much fun hanging out with The Cha's. Bogie and Beth and their kids were at Village Creek Bible Camp with the girls and I this summer. Bogie is Korea and took a gaggle of us out to show us how to do Korean BBQ. It was a smokey affair but delicious! Afterwards we had dessert in Korea Town (Bryn Mawr and Kedzie). The group split up but Beth and night burned the wee hours of the night and went to the Michael Heaton concert! She is a hoot and a holla! I love Michael Heaton's music. He does great covers too. But his original stuff is sheer joy to absorb and enjoy. Mike is a great performer and is good at remembering people's names. Especially mine. He says hello to me from the stage. I feel a little awkward, but hey, what girl doesn't like to stand out in a crowd? I take it where I can get it. Check out his music. You won't be disappointed.

Now, Beth... she is a true sista. We were at Fado's Irish bar. No cover, which was the impetus for us actually schlepping to Clark and Grand (downtown) to see my fav Mike Heaton. We got ROCKSTAR parking for free on the street, just steps from the venue. I had a small flask of Maker's Mark bourbon whiskey in my coat pocket (it was sealed and intended for something else). After buying the first round of drinks for Beth and I (mere wine and a whiskey) I was out $20. But I had that bottle in my pocket! I found us seats in the very front of the house at a huge table. My drink was out and I was hesitant to crack open that Maker's Mark. It was a seriously Irish bar. Those bouncers would catch me and happily punch me in the face. Beth asked what I was fumbling with and I told her my sitch. She laughed and said "i'll help you". She held the glass, I poured. Viola. Free hooch compliments of my pocket an the steady hand of a friend, under the table to catch it. LOL. We sound like badasses, don't we? I'll let you decide.

In the meantime, don't underestimate the coolness of two hot blonde-mammas on a night out. Or Michael Heaton's awesome song writing. Cheers all!

Posted by Beck at 7:31 PM 1 explorers in an expanding universe Links